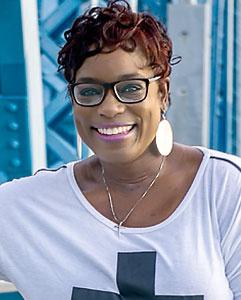 Rev. Juana Jordan
Rev. Juana Jordan is a pastor and preacher on the move and one to watch. As a former award-winning journalist and media consultant turned Gospel storyteller, Rev. Jordan has a knack for seeing and showing the hope in every person’s story and connecting their story with God’s story.
A native of Jacksonville, Florida, Rev. Jordan is currently the pastor of First United Methodist Church  St. Augustine, an appointment that made her the first female and African-American pastor of the congregation that in the late 60s refused admittance to black worshippers. She has served as a church planter in Jacksonville working on building and creating multi-ethnic faith communities. Seeing herself as a bridge builder, Rev. Jordan also served as an associate pastor at Southside UMC in Jacksonville, where she was the first African-American and female to serve that congregation. As an elder in full connection of the Florida Conference of the United Methodist Church, Rev. Jordan holds a Master of Divinity degree from Emory University Candler School of Theology in Atlanta, Ga. and a bachelor’s degree in broadcast journalism from Johnson C. Smith University in Charlotte, NC.
Her background is storytelling. For nearly 14, years, she wrote and edited for daily newspapers in Georgia and Florida before pursuing a career as a media consultant. She has also been a radio co-host and adjunct journalism adviser at Florida A&M University in Tallahassee, Fla. In 2008, she answered a call from God to marry her gifts and skills of a journalist with those of ministry and pursued a Divinity degree, where her concentration was in Black Church Studies, Church and Community and Woman, Theology and Ministry.
Rev. Jordan preaches messages of hope, liberation, deliverance and of being found by God and is committed to the work of inclusion by those who have been marginalized and forgotten. Rev. Jordan cut her teeth in this area while at Candler, where she spent a year working at the Marietta-based MUST Ministries as a pastoral intern, providing pastoral care and counseling to persons who were homeless. She worked as an assistant chaplain in Sister’s Chapel at Spelman College and also as a chaplain in the heart of downtown Atlanta at Grady Memorial Hospital.
Out of seminary, she became the youngest and only second female pastor to serve as senior pastor of Harris Chapel UMC in Ft. Lauderdale, Fla., her very first appointment, where she served for 5 years. She served on the conference design team for the Young Adults in Mission ministry and as a leader in the Southeast District. She currently serves on a number of conference committees, including the Committee for Religion and Race, the Institute of Preaching, the Committee on Episcopacy and as a leader in the Northeast District. She is on the Board of Directors for Campus to City Wesley, the United Methodist Collegiate Ministry in the Northeast District and also serves as the chaplain for the National Chapter of the Black Clergywomen of the United Methodist Church.
Rev. Jordan is a preacher, teacher and workshop presenter and facilitator who has addressed church congregations across the country and abroad, including islands in the Bahamas and in South Africa. She has ministered to university and youth groups and community organizations. She is passionate about pursuing her passion as a Gospel storyteller, teacher and writer, and believes like the Rev. Dr. Nancy Lane that “telling our stories is a holy work.” She is extremely dedicated to helping others, especially women to recognize and understand their purpose and find their voice. In March 2010, her voice was among 100 other Candler School of Theology Women and alumna featured in the released publication Candler Women Stories.
When time permits, Rev. Jordan can be found at the local kickboxing gym, dancing to the rhythmic beats of the African drums, thrift store and consignment shopping, racking up sky miles, and sharing her thoughts about faith, God and her spiritual journey on her blog goinbrokeforthelord.blogspot.com.
Proudly powered by Weebly